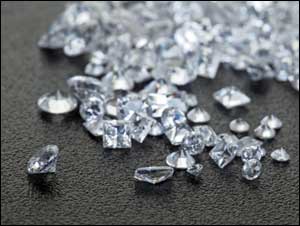 We happen to have several jeweler and loose gemstone clients, and were recommended by one of our clients to a wholesaler of loose diamonds.  Historically, most of their sales had come from posting their inventory on a couple of the industry-standard inventory web sites.  That offered excellent exposure, but given the economic conditions of the past couple years, this client was looking to increase their direct sales originating from their own web site.

The Challenge
The loose gemstone business is not one where actual orders are often conducted online, but things like browsing/searching for inventory, looking at EGL or GIA certificates, etc., are important online steps in the sales process.  Early discussions with the customer indicated that they had reasonable numbers measuring which sales originated from people searching their inventory on their own site, versus the third-party sites, versus not at all.  This information came from simply asking the customer when a stone was purchased.  However, they did not have the ability to measure how many inventory searches were being performed on their site, or which stones & certificates were being viewed individually.  We first implemented some basic functionality into their web site to start logging this kind of information while we began work on identifying areas for improvement to the site.

A Usability Study to Identify Issues Hindering Sales
We conducted a Usability Study with four custom jewelers who fit the target segment requirements.  This was a smaller group than we would have liked, but was the most we could do within the funds our client had available for the project.  However, even this smaller sized test (we originally recommended a test group of eight to twelve subjects) identified several issues that could be easily corrected.  Some were quite simple.  For example, there was an issue with the system such that every stone had a link to view the scan of the lab certificate, even if no such scan existed (not all stones had lab certificates uploaded).  So when potential customers clicked to view a non-existent certificate and got an error, they lost confidence or even thought that they would not be able to view a cert for any stone.  Our customer had not even been aware of this issue!  Fixing this issue required just a few lines of code, which we did for the customer ourselves.  The cost of this fix was almost nothing.

Another example that had a clear effect on the bottom line was that after performing a search, if a customer wanted to do another search, they had to re-enter all of their search criteria.  If someone only wanted to change one aspect, such as the shape of the cut of the stone, but leave other things such as Clarity & Color range the same, they had to go and reenter all of that.  Upon hearing some complaints about that during testing, it seemed clear that there would be more searches conducted on the site if that were made a little easier.

Results of the Usability Study
The study produced a list of 32 recommended changes to the web site that would require varying levels of effort to implement.  Not all of them were implemented, nor did we expect them to.  But several were implemented, and the improvement in the numbers was terrific.  In the first four months, the number of inventory searches conducted on the site increased by 63%!  The number of lab certificates viewed increased by 58%.  And according to their internal record keeping on sales, orders originating from their own web site increased by 31%.  No changes had been made to how the site was marketed or promoted—traffic to the web site saw a modest increase (19%) during that timeframe which contributed to the increase in sales, but we feel that this also due to the improved ease of use of the site since there was no additional marketing done to drive traffic to the site.

Conversion Optimization Often Beats Increased Search Spending
It’s easy to see why the Usability Study was such a wise use of our customer’s money.  To achieve a 31% increase in traffic for those four months would certainly have cost much more than the cost of our study.  And rarely do a site’s conversion rates maintain themselves when all that is done is to cast a wider net in terms of traffic.  Also, the conversion increases from the study will continue to pay rewards for months and years to come, whereas methods to increase traffic would likely require an ongoing cash investment.

It’s still a tough economy right now for the jewelry industry.  But this is one company that is in better shape because of Web Site Optimizers.  If you have clients that are looking for an edge in their marketplace, perhaps now is the time for them to invest in their web site the smart way—through a Usability project.

This entry was posted in Case Studies. Bookmark the permalink.