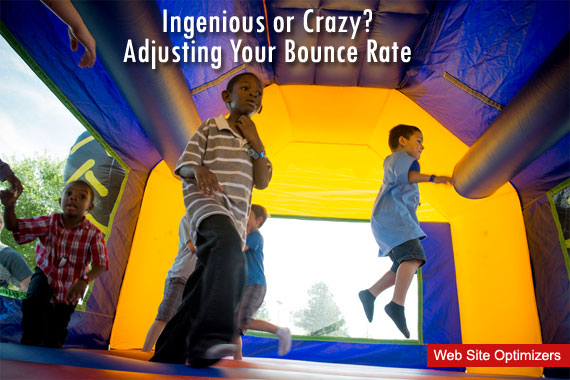 More and more frequently these days I hear people advising for an analytics adjustment that might sound a little crazy, or might sound ingenious:  adjusting the Bounce Rate in Google Analytics.  They do this in an attempt to more accurately measure who is bouncing, and who is engaging with your site.  But is this really a good idea?  Which is it:  crazy or ingenious?

Just what does adjusting your Bounce Rate mean, and why are people doing it?  It starts with how Google Analytics defines a “Bounce”, and how analysts use Bounce Rate to improve a site.  In general terms, a “bounce” is a session where someone came to your site but didn’t do anything.  To quote the wonderful Avinash Kaushik, “they came, they puked, they left.”  Essentially it implies a worthless session.

Google measures bounces as any session that includes exactly one page view.  If they go to another page (or incur any other GA hit, such as an Analytics Event), the session was not a Bounce.

But so the argument goes, there are many single-page sessions that are actually valuable.  If your site is a blog, and someone entered a question into Google and landed directly on one of your blog posts that answered the question, they may read your article, be satisfied with the answer, and leave.  They only viewed one page on your site, but they were happy and left.  It was a valuable session.  So that shouldn’t be counted as a Bounce, right?

Because of situations like this, people started thinking of other ways to measure Bounces.  Some people put in certain code on a page to fire a GA Event if someone scrolls to the bottom of the page.  The Event triggers a second GA hit, and no bounce is counted. 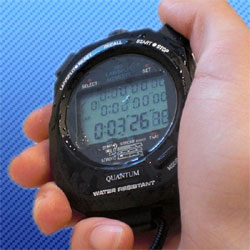 One very popular method of trying to report Bounces more realistically is to fire an event after so many seconds have elapsed.  For example, once someone arrives at a page on your site, a timer starts ticking, and after a predefined amount of time, say 30 seconds, they assume that the user has been consuming content and that it is a valuable session.  So they fire a GA Event so that the session does not get counted as a Bounce.  I’ve worked with companies who have set this threshold as low as just five seconds!

Is Adjusting Your Bounce Rate Like This A Good Thing?

I’ve heard lots of experts who I admire greatly advocate for this practice lately.  I mostly see them advising for the timer-based method, presumably because it’s pretty simple to implement, especially with Google Tag Manager.

But it surprises me that they are proponents of this tactic.  I’m going on record to say that I am not in favor of it.  The problems it can cause can quickly outweigh the benefits. 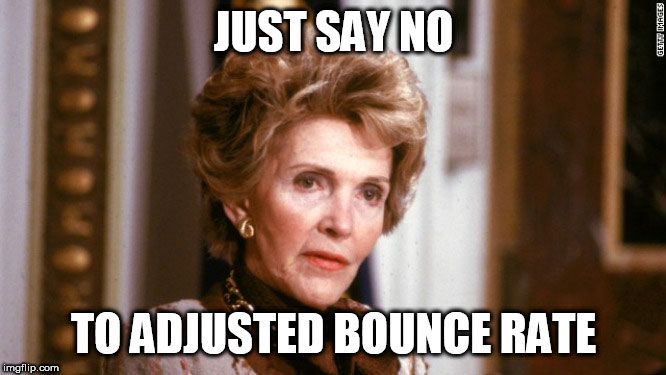 Right or wrong, “Bounce Rate” has become a pretty well-known metric in the Digital Marketing arena.  And despite the fact that some analytics tools have measured it differently, the proliferation of Google Analytics means that their definition of a Bounce (a one-page-only session) has become the defacto definition.  The vast majority of Digital Marketing professionals know what Bounce Rate is, and how it is (typically) calculated.

You don’t want to go around changing the definitions of standard metrics.

Think about the sports world.  Batting Average has been one of the core statistics used in baseball for over a century.  Every baseball fan knows that batting average is the number of hits a batter gets, divided by his times at bat.  They know that a .300 average means you’re a pretty good hitter, regardless of what decade you played in. 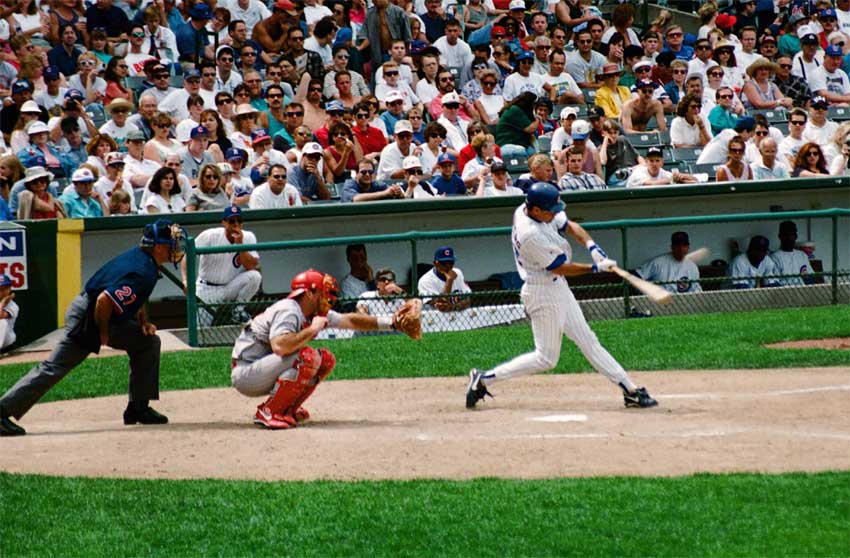 Then along came some pretty smart people who postulated that really, walks should figure into the calculation.  A walk is almost as good a single, and incorporating them into your evaluation probably gives a truer picture of how well a player does at the plate.  Certainly how often he reaches base.

But they didn’t just go and try to change the definition of batting average.  Too many people have been using that for too many years.  The re-education process would be nearly impossible.  We’d have to go back and recalculate every batting average for every player for every season to keep things accurate.  No, instead, they just created a new stat, called On Base Percentage.  That’s a much better way to go about it.

Now think of the Business Industry.  A standard financial measure is Gross Margin.  Gross Margin is the revenue you get from sales of a product less the cost of the goods sold.  Basically it’s what you sell an item for, less what it costs you to make it. 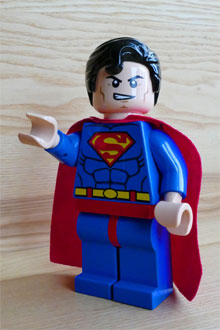 Well, for one thing, you’d look a lot better!  Your revenues would go up, but your costs would stay the same.  Your Gross Margin would go up!  You’d look like a hero and probably would want a raise.

Except that that product isn’t really doing any better.  The company might look at the Gross Margin for your product and want to expand it significantly, which would be a poor decision since the Gross Margin is actually being artificially inflated.

Changing the definition of standard metrics can lead to bad decisions unless everyone (EVERYONE) is on the same page and knows about how the metric has been redefined.  That rarely happens (as in, I’ve never seen it happen).

What Do You Use Bounce Rate For?

Bounce Rate isn’t a vanity metric.  It’s a diagnosis tool.  If you’re adjusting your Bounce Rate just for the purposes of lowering it, so executives will think you’re doing great, you’re going down the wrong path.  Bounce Rate is best used on a page-by-page basis, to see which landing pages do the best at jobs such as intriguing a customer, keeping the information scent alive, and funneling them toward conversions (and which do poor jobs at those).  If you artificially lower your Bounce Rates so that all pages show about a 10% level, you can’t really discern which pages are being effective, and which are not.

The argument in favor of adjusting a bounce rate is that it more accurately measures the engagement level on a given page.  But does it really?  There are dozens of reasons someone might spend more than 30 seconds on your page without reading it.  If someone comes to your page and they get a text that takes their attention for a minute before they look back at your site, have they really engaged with it?  They still might leave immediately.  Even if they spend five minutes reading through the entire page, that doesn’t mean that the page did anything to approach meeting their needs. 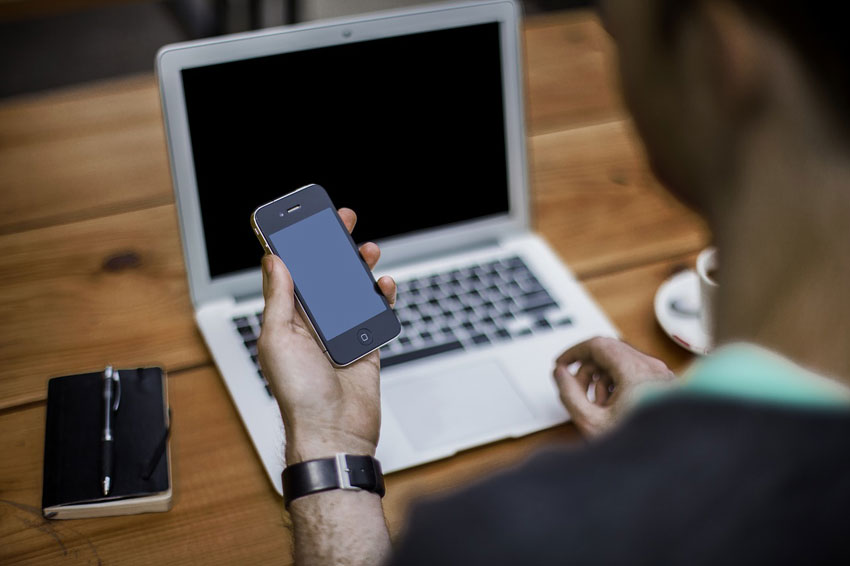 With more devices being used, interruptions are more frequent. An arbitrary time spent on a page does not equal engagement.

Heck, if you sneeze, as the page is loading, there’s a good chance you’ll spend six seconds on the site before you leave.

If you set a GA Event to fire after a given number of seconds, all you actually know is how many people stayed on the page that long.  You still don’t know how many were worthwhile sessions.  And it’s much harder to determine how many of them left without doing anything you are hoping for.

In the End, all the pages on your site exist to help drive conversions.  And if a visitor comes to a page and does nothing else (other than possibly read the page), that page probably didn’t contribute anything to achieving a conversion.  There’s a chance that the page gave the information the visitor wanted, and that that could lead to them coming back at a future date, but more likely is that they came, they puked, and they left – whether they were there five seconds or five minutes.

For conversion optimization, you want to be able to see which pages entice users to explore more areas of your site, and take actions which are indicative of them moving through your funnel.  If you  eliminate the standard measure of Bounce Rate as it is today, you lose the ability to do that.

If it is important to know what portion of your visitors spend a specific amount of time on the page, there’s a better approach than redefining what Bounce Rate means.  You can still set the timer, and trigger an Event for Adjusted Bounce Rate (or whatever you might want to call it).  But do that such that it doesn’t affect the calculation of a Bounce.

Google Analytics Events code includes a flag you can set to tell GA not to count that Event as an interaction, so that the Bounce Rate isn’t affected by the Event.  By doing this, you can still go into GA and see how many page views lasted long enough to trigger that event, but your baseline Bounce Rate won’t be lowered.  Essentially you’re getting the best of both worlds (although I still believe the Adjusted metric is only of value in certain situations). 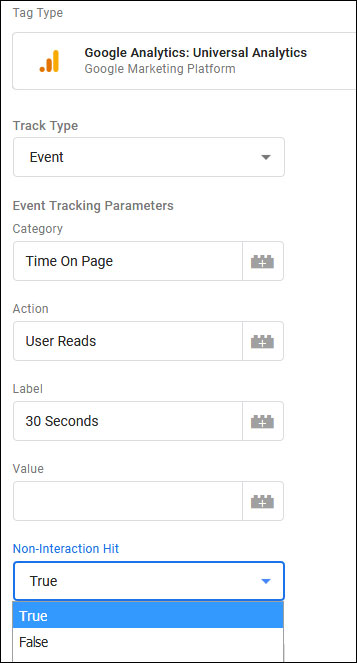 When adding a GA Event Tag in Google Tag Manager, you should change the Non-Interaction Hit flag to “True” if you do NOT want recording time on page to stop the session from being counted as a bounce.

Think About Your Site’s Objectives

If your site is a media site, a site whose primary purpose is to serve content that people consume, then you might be justified in adjusting your Bounce Rate.  But a lot of care must be taken to make sure this comes out accurate and useful.  You need to have a very good estimate as to how long people need to stay on the page before the Event is triggered.  And that time period is probably different for each page, which gets very difficult to implement.  I think scroll depth tracking is probably a better way to go for media sites.

But if your site is pretty much any other kind of site (Ecommerce, B2B Lead Generation, Software As A Service, Non-Profit Fundraising site, etc.), you want every landing page to entice a visitor into exploring more of the site.  Bounce Rate, and I’m talking about the traditional definition of Bounce Rate here, is a key tool to help you do that.  Don’t throw that tool away by artificially reducing your Bounce Rate.

I know there are a lot of people out there, very knowledgeable people out there who disagree with me.  Now is the time to keep the conversation going.  Leave your comments below, either pro or con, about implementing an Adjusted Bounce Rate for your site.

This entry was posted in Analytics. Bookmark the permalink.