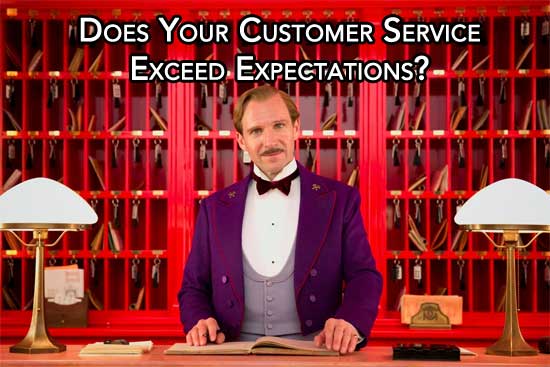 When it comes to loyalty and referrals, good customer service that exceeds expectations rules.  Most of you probably think you know that, but how many of you really implement it in your business?  Top-notch customer service is not just something that you hope makes your company superior to your competitors.  It’s truly a table stake for success.

Nowhere is this more true than when you have made a mistake or inconvenienced a customer, and how you handle that.  Maybe you shipped to the wrong address or delivered the wrong product.  Perhaps there was a bug in your system that prevented a customer from being able to log in.  Maybe it wasn’t even your fault, but if you can’t turn that negative experience into a positive one, the customer probably won’t be coming back.

And if all you do is simply “make it right”, they might or might not come back.  It’s sad, but it’s a fickle world out there.  On the other hand, if you go beyond “making it right” and make it a positive experience, you will probably gain loyalty from that customer.  They’ll also tell their friends, giving you more business.

I’ve been doing a lot of traveling lately—for business and for pleasure.  In June I was speaking in San Diego at a User Experience conference that was held at a high-end hotel.  Unfortunately, they had my reservation, but could not come up with an actual room for me when I checked in.  They ended up putting me in a room that had no bed.  I had to sleep on the couch! 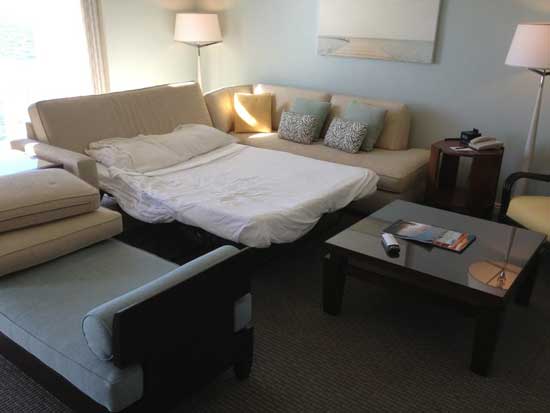 This is my actual room and actual “bed” I got to sleep in that night in San Diego.

Expectedly, I was pretty unhappy.  I wanted a good night’s sleep before my presentation the next day.  After I asked them to, they comped my room for that night, and moved me into a real room for the second night (which they did not comp).

A couple weeks later, I was staying at a hotel in downtown Baton Rouge with my wife and three kids.  This is a prominent hotel chain with a very well-known brand that has a reputation for quality.  At about 11:30 p.m., the fire alarm went off and we had to evacuate the building. 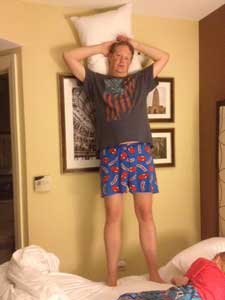 This was me for nearly an hour and a half, trying to muffle the sound of the fire alarm the hotel could not shut off so my kids could fall asleep!

It was a hassle with three kids 6 and under, but these things happen.  The problem was that even after it was safe to go back inside, they could not shut off the alarm for 90 minutes!  I had to stand with the pillow up against the alarm speaker so my kids could fall asleep—for 90 minutes!

We were checking out the next day, and before I could say anything about the night before, the clerk said my room was being comped.  That was more proactive than my experience with the other hotel, but it still simply reimbursed me for what was not delivered in the first place—a good night’s sleep.

Simply Making It Right Does Not Create Loyalty

Will I return to these hotel brands?  Well I certainly won’t be staying at that hotel in San Diego anymore, and probably will avoid the brand in other cities, although I typically don’t stay in hotels that expensive anyway.  And that’s part of the problem.  For high-end hotels, I expect better hospitality, not worse.

As for the Baton Rouge hotel, I’m sure I won’t stay there in Baton Rouge again.  I’m probably not avoiding the entire brand, which would be difficult anyway.  But the taste left in my mouth is still not a good one.  I’ve not mentioned the hotel name when talking about the story to others, but many people would.  I did tweet about the bad experiences at the time.

This Hotel Knows How To Exceed Expectations

Then in July, the whole family traveled to Galveston in Texas for a work conference my wife was attending.  We stayed at the Moody Gardens Resort.  I had the challenging task of entertaining our three kids, age six and under, while my wife was in her conference sessions.  I’ve learned that things like breakfast buffets are pretty challenging with three kids!

The first day, the waiter helped me tremendously.  I think he felt sorry for me!  But the second day, we never had a waiter.  None ever came to our table.  The kids were acting up a bit and I was getting a little flustered.  It’s hard to leave three little kids at a table and run to the buffet line to try to get them some food and run back to the table with it.  And then repeat that several times, hoping they don’t knock something over or make a ruckus!

So having had an excellent waiter the day before who helped me a bit, it was harder when none was even assigned to my table that second day.  For the first time in my life, I left a zero dollar tip, since there was nobody to tip (I had to ask the manager just to get a check).  I left a brief note to explain why the tip was zero.

I knew it was just a mix-up, a simple mistake.  We returned to the same hotel restaurant that evening for dinner.  But when we returned to our room after dinner, I was surprised to find a plate full of desserts in our room, with a note apologizing for the mix-up at breakfast, saying that not only did they comp that entire breakfast check, but that the next morning’s check would also be comped, if I “would give them another chance.”

The two hotels in the earlier examples thought they were making things right.  That’s not even true in the first case.  Given that I had to speak the next day, I would have much preferred to pay for a room with a bed than get a free night and sleep on the couch.  But in both cases, my feeling walking away was negative.  Is that what these hotels wanted when they tried to handle the situation and make it right?

On the other hand, the Moody Gardens wanted to make sure I walked away with a positive experience.  They not only “made it right” by comping that meal (which probably exceeds simply making it right itself), but they gave me my next meal free as well.  And they sent up the gift of dessert to our room as well.  These were little things that went a long way.  Here I am blogging about my experience at Moody Gardens in Galveston.  Our entire trip was excellent.  You should go there!

Transfer This To Your World

So how does all this hotel stuff apply to a Digital Marketing blog?  If you’re asking that question, you’re missing the point!  The point is, that online or offline, the same principles regarding customer satisfaction apply.  If you find yourself in a position where a customer was unduly inconvenienced, think twice before simply attempting to make it right.

Did you accidentally bill someone twice?  Instead of just refunding one of the charges, are you able to refund both?  If not, can you send them a coupon for a future product?

Did they order blue and you sent brown?  Don’t make them return the brown.  Instead send them the blue, and add in a product that compliments the brown item.

Some might say they just can’t afford to “give away” that much stuff even if you made the mistake.  But I’d argue that you can’t afford to just give away a customer to your competitor after you made such a mistake.  Instead, you could be generating a lot more future revenue by securing a customer for life.

What experiences, good or bad, have you had with customer service lately?  Tell us in the Comments section!

This entry was posted in Marketing Decisions. Bookmark the permalink.