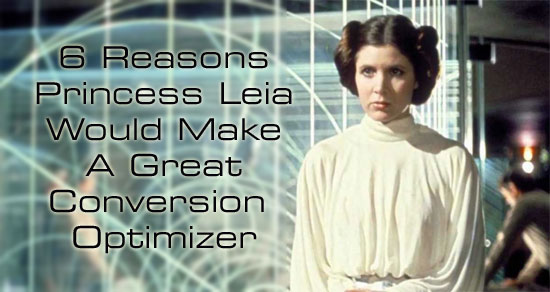 With the recent release of “The Force Awakens”, The Star Wars franchise is once again booming.  Not only did the film shatter opening-weekend box office records, fans are also flocking to see the earlier films in the series as well.

With Star Wars on everyone’s minds, we were wondering at WSO, which of the primary Star Wars characters would make the best Conversion Optimizer?  My money is on Princess Leia.  Daughter of Darth Vader, sister of Luke, wife of Han Solo, Leia certainly plays a key role in the Star Wars storyline, but she also exhibits some key characteristics that would make her an excellent Conversion Optimization expert.  We’d love to have her here at Web Site Optimizers.  Here’s why.

In our industry, we like to refer to the HIPPO, which is the Highest Paid Person in the Organization.  Idly following the HIPPO’s opinion on things like the makeup of a landing page, without basing it on real data and results often leads to failures.

For example, instead of automatically including a rotating image slider on the Home page because the HIPPO suggests it, a better decision would be to run a test on the page with and without the slider to see which version performs better.  An important characteristic of a good Conversion Optimizer is to keep everyone focused on bottom-line results.

Princess Leia shows time and time again that she’s not too concerned with who is in authority.  When being rescued on the Death Star by Han & Luke, Leia shows little concern about their authority on the mission, openly challenging it several times.  When they all find themselves trapped with no way out, Leia bucks Han’s plan and blasts open the garbage chute to get them out of harm’s way. 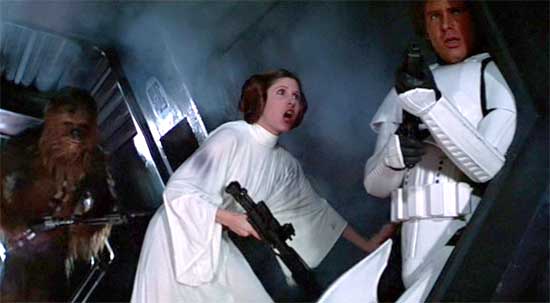 While being rescued on the Death Star, Princess Leia is not concerned about who is and who is not in charge of the escape, eventually bucking Luke’s plan and blasting open the garbage chute to facilitate the escape.

At the same time, especially early on, Leia can be disrespectful and downright rude to those in authority over her, and let’s face it, in the world of Conversion Optimization, this is not something we want.  But her relentless focus on finding solutions regardless of whose idea they were would be a huge asset in converting more website visitors.

While a good Conversion Optimizer must have many skillsets, the ability to analyze data and draw insight is especially important.  Reviewing analytics is the first step in identifying areas with the opportunity for the most improvement on a website.  And ensuring that tests are set up so that they accurately reflect success or failure is critical. 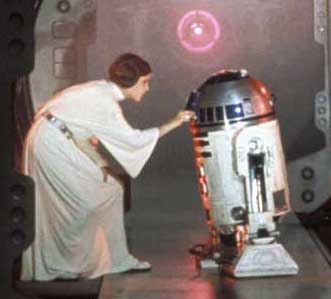 From the beginning, Leia understood the importance of the data. Her key to defeating the Empire was in the technical data of the Death Star.

Good intuition and instincts are very helpful, but an optimizer who relies solely on these instead of what the data is reporting is likely to be doomed to failure.

From her very first appearance in the first movie, Episode IV, Princess Leia is focusing on the data.  She knows that the key to defeating the Empire is in the technical plans for the Death Star.  Simply put, her plan was to use the data, the technical specs, to find a weakness which could be used to destroy the Death Star.  There’s no question that she’d carry that data-driven attitude over to her role as a Conversion Optimization expert.

That’s an over-used term in our industry, “Best Practices”.  It’s true that there are things that just make sense on a website, on almost any website, such as making your Call To Action stand out.  However, every site is different, in a different industry with different visitors who are trying to do different things for different reasons.  Making changes just because those changes improved a couple other sites won’t necessarily yield improvements for yours.

If a Conversion Optimizer is just reading articles that list “best practices” such as “your form should be on the right”, “your buttons should use a color off the palette of the site design”, “the search box should be large and at the top center”, etc., they are not earning their money.  A good optimizer will look at the data, identify opportunities, get creative, and try some new things.

Princess Leia has no troubles thinking outside the box.  I mean, that Cinnamon Bun hairstyle alone tells you she’s not unwilling to try something a little unconventional.  However, it did seem to work for her, as she caught Han’s eye. 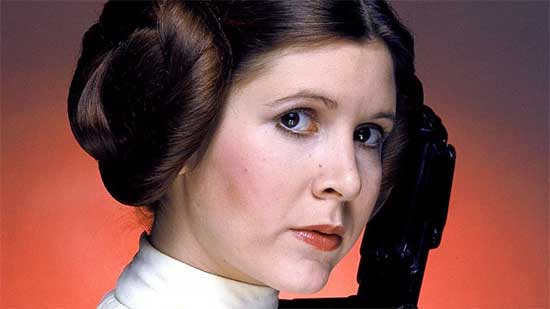 She Is Unshaken After Defeats

There are hundreds of articles and stories from Conversion Optimizers about winning tests with large lifts.  But the truth is that most tests do not result in a meaningful lift.  Most tests do not win, and that can be frustrating.  But like in anything else, the key is to learn from such a loss, and take that gained insight and create a new test that will win.  An effective Conversion Optimization expert cannot get frustrated over losing tests.

Princess Leia faces significant setbacks throughout the initial trilogy.  In Star Wars Episode IV, Darth Vader and Governor Tarkin use the Death Star to destroy Leia’s home planet of Alderaan.  Now let’s face it.  Having your entire home planet blown up would be a bit of a distraction to just about anyone.  Yet when she is greeted by General Willard after her rescue, she doesn’t wallow in that defeat.  She is focused and to the point:

“We have no time for sorrows, Commander.  You must use the information in this R-2 unit to help plan the attack—it’s our only hope.”

Such an attitude will make for a long string of successful Conversion Optimization projects! 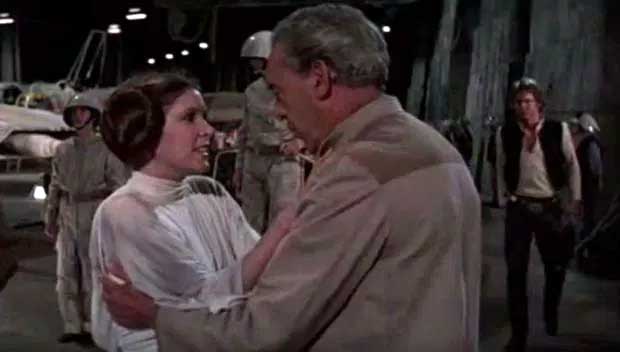 Even after her home planet was destroyed, Leia did not dwell on the defeat. She kept everyone focused on the next move to defeat the Empire.

She’s Not Afraid To Kill A Great Big Monster

In “Return of the Jedi”, Leia is captured by Jabba the Hutt and chained to him as his slave.  With a captor that big and gross, most would take the safe & easy way out to wait for Luke’s rescue and get out of there.  But not Princess Leia!  When chaos reigns, she sees her opportunity and uses her own chains to strangle the big monster. 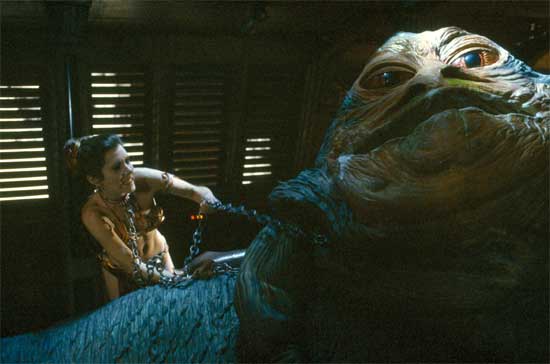 Whether it is a distracting image slider, meaningless stock photography, or a huge Hutt, Princess Leia is not afraid to kill a giant monster.

Sometimes, there is a component to a website or a landing page that is also a big monster, something that is really killing conversions.  It might be meaningless stock photography, perhaps of a model taking attention away from the call to action.  It might be a huge list of products or options, or it could be the aforementioned image slider.  Often, the original reason for this monster’s existence is not even known.

A good Conversion Optimization expert will see the opportunity to get this monster off the page—to kill it.  We are certain Princess Leia would be willing to do so, ideally with an A/B test that would determine if the site converts better with or without the monster.

For much of Leia’s early screen time, she’s rather harsh, or at least pretty snarky.  But who can blame her?  Her home planet was just blown up!  However, when you look at her more closely, you see that she is actually quite adept at working with a wide variety of people and winning them over.

As a princess and a senator, she was obviously trained to partner with different people (and species) to solve problems.  She convinces Obi Wan Kenobi to come out of retirement and help the Rebel Alliance.  Despite her initial annoyance with Han Solo, she works with him and appreciates the value he brings.

A good Conversion Optimizer has to be able to work effectively with a wide range of people, realizing that they are all valuable members of a team.  He or she must be able to talk technical code with a developer, yet explain the same concepts to marketers in terms that they can understand.  Conversion Optimizers must be able to communicate the importance of focusing on results, not just fancy or cool designs, and get designers on board with that philosophy.

More than anyone else, a good Conversion Optimizer must truly be a diplomat, working effectively with everyone connected to the website.  Clearly, Princess Leia’s abilities and experience would enable her to shine in this area.

Look For These Characteristics And More

These are just some of the traits of a good Conversion Optimizer.  There are others, some of which Princess Leia surely possesses as well.

What skills and assets do you look for in potential new team members?  Which Star Wars characters exemplify these?  Let us know in the Comments section below.

This entry was posted in Conversion. Bookmark the permalink.